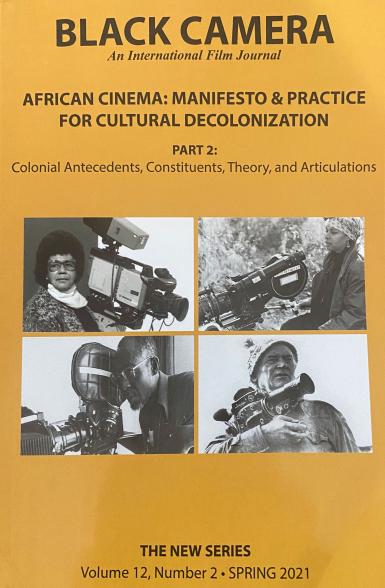 The newest issue of Black Camera: An International Film Journal is the second of a three-part collaboration with the Pan-African Film and Television Festival of Ouagadougou, a major biannual festival devoted to African and Black diasporic cinemas.

Part II draws together notable scholarship on the history, constitution and theorization of African cinema. It includes three dossiers, including a timeline of key dates in African cinema by Olivier Barlet and Claude Forest, and a timeline of important contributions of Africa’s women filmmakers by Beti Ellerson. The third groundbreaking dossier on the legacy of Ousmane Sembène, curated by Samba Gadjigo and Sada Niang, reflects on Gadjigo’s documentary on Sembène in an interview with Black Camera editor-in-chief, professor Michael T. Martin, and also includes an annotated gallery of Sembène artifacts from IU’s own Lilly Library, put together by master’s student Cole Nelson.

The third issue will be published this summer, finishing out this historic three-part collection.

A scholarly publication supported by The Media School, the journal is edited by Martin. Doctoral candidate Megan Connor is the managing editor, and Nelson and doctoral students Allison Brown and Essence London are assistant editors.