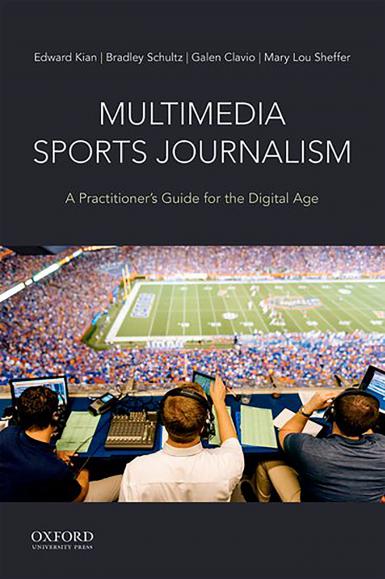 According to associate professor Galen Clavio, the sports journalism field is exploding, and has been for the last 20 years. He also said there’s a gap in the literature on how to teach students ways to effectively report on sports and the people in them.

“There isn’t a book that covers what it means to be a sports journalist,” he said. “There’s nothing about social media in its current state or how multi-faceted (sports journalists) have to be once they graduate.”

A colleague approached Clavio with a pitch for a book on the topic, and he jumped at the chance to get involved with “Multimedia Sports Journalism: A Practitioners Guide for the Digital Age.”

Clavio said sports journalists have to be jack-of-all-trades now, and this textbook should help make that possible. It’s meant to be an entry-level book in what students need to be successful as sports reporters.

The textbook was written completely by professionals who have been in the field, said Clavio.

“We wanted to give students a sense of what it was like,” he said. “It’s knowledge that we wish we had.”

“You might be covering sports, but it’s regular news reporting,” he said. “It just happens to be focused on sports.”

Clavio authored the social media chapter, a “huge” aspect of the job he doesn’t think gets talked about enough.

“It’s hard to keep up with the changing nature of the business, but it’s important to learn how to promote yourself, promote your work on Facebook, and learn how to interact with people on social media,” he said.

Clavio said he plans to use the textbook in his Introduction to Sports Journalism classes, and he hopes it’s adopted in sports media classes across higher education.

“A lot of people are interested in sports media, and I think the market is ready for it,” he said.