BLOOMINGTON, Indiana — Kamala Harris is not a natural-born American citizen. Joe Biden’s family has illegal business ties with China. Large segments of the population are aware of these kinds of unsupported narratives related to the fall 2020 election and believe at least some of these narratives are true, according to the first in a new series of reports by Indiana University’s Observatory on Social Media (OSoMe, pronounced “awesome’).

Researchers found almost 80% of participants in a recent survey were aware of at least one of five unsupported narratives through media exposure, and just over 60% believed at least one of the narratives was true. About 39% did not believe any of the stories, which include unsubstantiated claims about mail-in election ballots, Democratic presidential nominee Joe Biden, his running mate Sen. Kamala Harris and infectious disease expert Dr. Anthony Fauci.

“The current state of hardship in our country produces favorable conditions for an infodemic,” said Media School professor Betsi Grabe, a co-author of the study and co-leader of OSoME. “Uncertainty, anxiety, social isolation, economic hardship and spare time create near-perfect circumstances for unsupported narratives to sweep through social media, stifling access to reliable information, deepening doubt about the trustworthiness of mainstream journalism and fueling political polarization.” 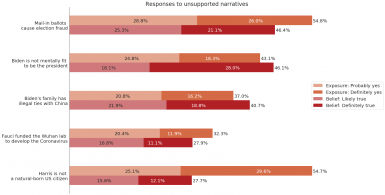 Grabe said the implications of the study are dire for the 2020 fall election.

“Democracy hinges on well-informed citizens to select a president,” she said. “And in a post-election era, disinformation narratives, like the ones we are tracking, have the potential to undermine the collective resilience of our nation to rebound on medical, economic, and political levels.”

The research team chose five narratives that had become prevalent on social media. It asked about 600 survey participants if they were aware of the narratives and, if so, whether they believed statements based on the narratives were true.

The statements were: “Joe Biden is not mentally fit to be President,” “Kamala Harris is not a natural-born U.S. citizen,” “Dr. Anthony Fauci funded a lab in Wuhan to develop the coronavirus,” “Joe Biden’s family has illegal business ties with China,” and “Mail-in ballots cause election fraud.”

The study also looked at the relationship between participants’ political leanings and their survey responses. It found more self-identified Republicans and Independents believed all five narratives than Democrats.

The study was conducted in late August and early September. The research team will run five further surveys during the course of the fall election season.

OSoMe is a joint project of the IU Network Science Institute (IUNI), the Center for Complex Networks and Systems Research (CNetS) at IU’s Luddy School of Informatics, Computing, and Engineering, and The Media School at Indiana University. It is funded in part by support from the John S. and James L. Knight Foundation, a nonprofit focused on fostering informed and engaged communities.

IU’s world-class researchers have driven innovation and creative initiatives that matter for 200 years. From curing testicular cancer to collaborating with NASA to search for life on Mars, IU has earned its reputation as a world-class research institution. Supported by $854 million last year from our partners, IU researchers are building collaborations and uncovering new solutions that improve lives in Indiana and around the globe.