Aspiring filmmakers and movie aficionados got an intensive, in-depth look at the craft of moviemaking last week with The Media School’s first-ever Digital Cinema Academy.

The program, directed by Media School lecturer Craig Erpelding, featured guest lectures by Media School faculty and industry professionals and gave students the opportunity to get behind the camera to create projects of their own.

Erpelding said he wanted to enrich the students’ appreciation of filmmaking and give them valuable experience to hone their craft.

“The whole point was to get students to start watching and thinking about movies through a different lens,” he said.

Erpelding said the films were selected by lecturers, and students completed worksheets while watching them to emphasize a specific focal point of their craftsmanship.

One evening, they watched Christopher Nolan’s superhero spectacle The Dark Knight with an emphasis on camerawork and production values. The morning after, students attended a lecture by Media School professor of practice Michael Uslan, BA’73, MS’75, JD’76, who produced every live action Batman flick from Tim Burton’s in 1989 to the recent blockbuster Justice League.

“The real point is for students to look at movies in a new way, as they get out there to be filmmakers,” Erpelding said. “They can take some of this knowledge and make even better movies.”

He said the program accepted 20 student applicants from all across the state of Indiana, as well as a couple of surrounding states.

“Our goal was to identify and bring in some of the best young voices from the region,” Erpelding said. “I feel like we were very successful in doing that.”

Parker Norris, a longtime, self-proclaimed cinephile from Mishawaka, Indiana, said the academy was an amazing opportunity to meet other film lovers and learn alongside them.

“In Mishawaka, at least with the media stuff I do up there, I only have one other person,” he said. “Being in a group of people that are like-minded like myself is refreshing.”

Norris said the program emphasized what he already knew he loved about the cinematic medium, as well as giving him a newfound appreciation for it.

“I feel like I’ve learned quite a bit about how complex the film medium is,” he said. “It’s really sort of opened up several ideas about the possibilities that film has, and how that can be applied.”

For his short film, Norris was working with a group of other Digital Cinema Academy students on an action thriller. He said the collaborative atmosphere was “really nice” and the other students were a joy to work with, because their skills all complemented one another’s.

“We’re all better than each other in certain areas, but together we make something that’s complete and whole,” he said.

Jaicey Bledsoe, an incoming high school senior from Indianapolis, said she learned a lot about the technical aspects of filmmaking.

“It’s given me a better understanding of how to create the stories I want to create as a filmmaker,” Bledsoe said. “It’s given me just a completely different perspective.”

The program was always fun, but also challenging to students of all skill levels, Bledsoe said. She said the assignments were engaging, and she learned a lot throughout the process of collaborating with other students on filmmaking throughout the week.

She also said the lectures were highly engaging and informative.

“I’ve learned so much from going over basic things that I already know, and then going deeper into different technical things,” she said.

Bledsoe said she really valued the community of students in the program. She said she felt like she’d begun building a network of other student filmmakers whose ideas and skills she valued and admired.

“I have definitely found a group of friends and a group of people that I will work with in the future,” she said. 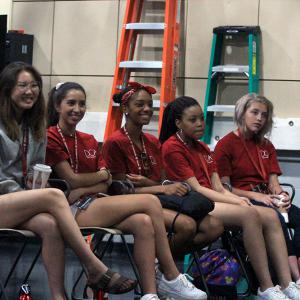 Students listen to instructions on how to assemble camera equipment for their upcoming video projects. (Ty Vinson | The Media School) 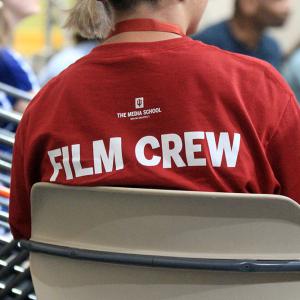 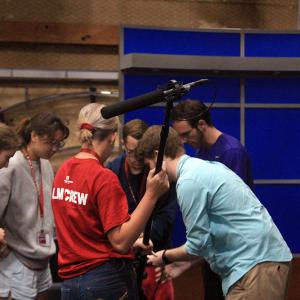 DCA students work in groups of four and five to assemble camera equipment for their collaborative film project. (Ty Vinson | The Media School) 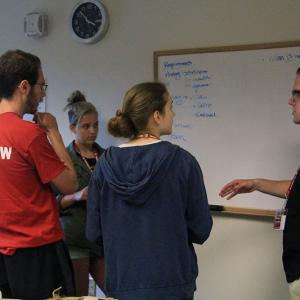 DCA students break into groups to collaborate on a short film. The groups were assigned a specific genre of film. This group is working on an action film. (Ty Vinson | The Media School) 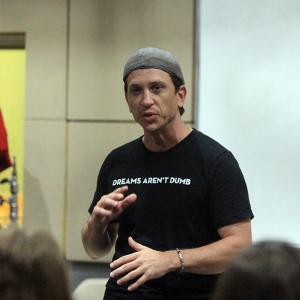 John Armstrong, BA’02, MFA’07, COO of Pigasus Pictures, talks to students about how he got into producing films. His company is best known for the 2017 film, The Good Catholic. (Ty Vinson | The Media School) 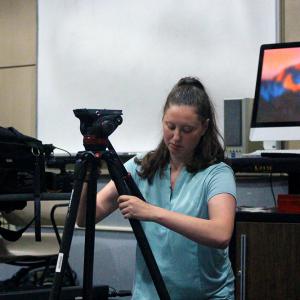 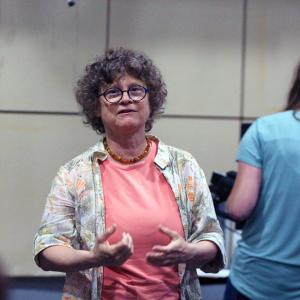 Emmy-winning director Susanne Schwibs, a senior lecturer in The Media School, teaches students of the Digital Cinema Academy the fundamentals of cinematic production in Studio 5. (Ty Vinson | The Media School) 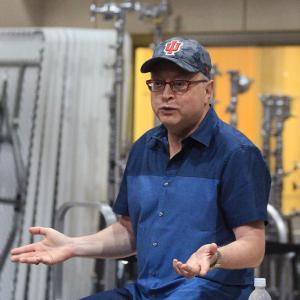 The Dark Knight executive producer Michael Uslan, BA’73, MS’75, JD’76, a Media School professor of practice, explains how he went from a blue collar upbringing in New Jersey to producing films in Hollywood. Uslan then answered questions from students on how to get a career in the film industry. (Ty Vinson | The Media School) 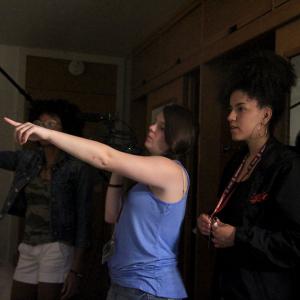 Tessa Haag points out unnecessary shadows on the walls before she starts recording a fight scene. The students had two days to record for their short films. (Ty Vinson | The Media School) 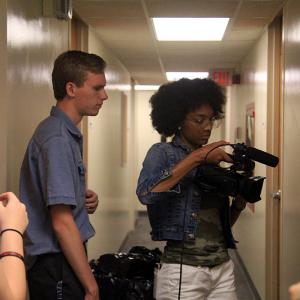 Jaicey Bledsoe takes a turn at the camera and records Ben Richards walking down the hallway with a trash can. The students produced a short film for the Digital Cinema Academy. (Ty Vinson | The Media School) 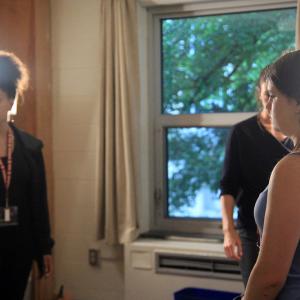 Tessa Haag listens as Joleena Mundy talks through their next scene. (Ty Vinson | The Media School) 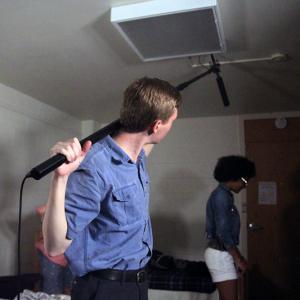 Ben Richards holds the boom microphone while his crewmates act out a fighting scene for their short film. (Ty Vinson | The Media School) 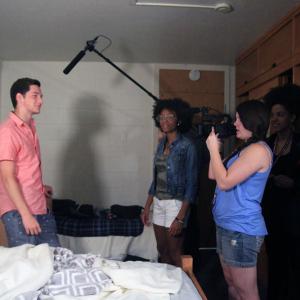 Oscar Kingsley, Tessa Haag and Jaicey Bledsoe talk through their next scene, in which Kingsley and Bledsoe are fighting. In the scene, Kingsley hits the wall after he is pushed, and he dies. (Ty Vinson | The Media School) 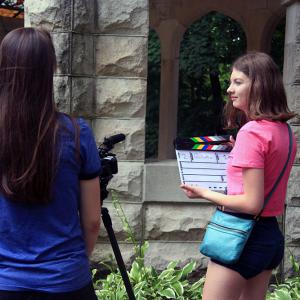 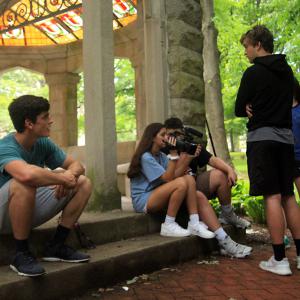 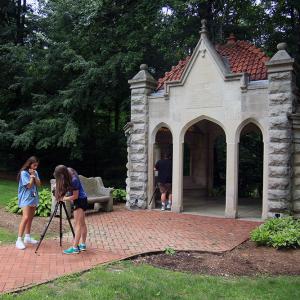 The thriller film students set up the equipment for the establishing shot of their film. The students chose the woods near the Rose Well House as the setting for their film. (Ty Vinson | The Media School) 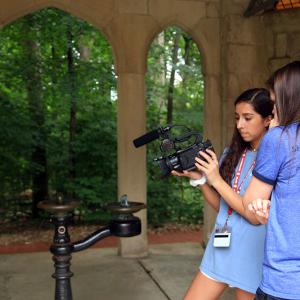 Digital Cinema Academy students review the last scene they shot to see if they need to do a retake. (Ty Vinson | The Media School) 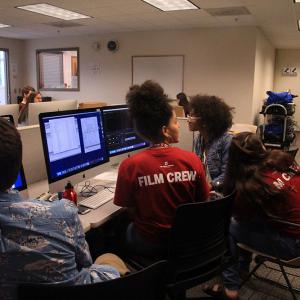 Students in the mystery/drama film group edit their film together. (Ty Vinson | The Media School) 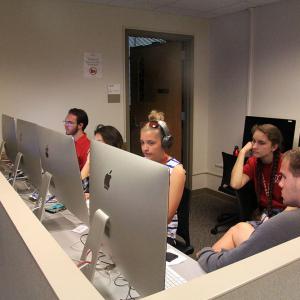 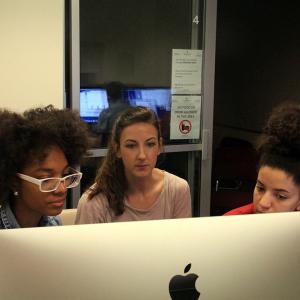