Associate professor Galen Clavio couldn’t find a textbook that fit what he wanted to teach — social media and sports — so he wrote his own. 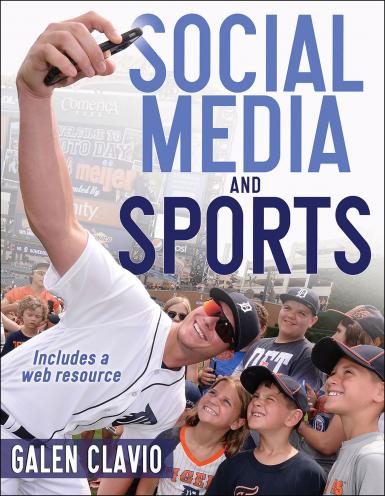 “Social Media and Sports,” published by Human Kinetics, was released in July.

“I think sports and social media are intrinsically linked with one another, kind of like how television and sports are linked to one another,” Clavio said. “It attracts audiences of people who are passionate about something.”

Clavio, director of The Media School’s National Sports Journalism Center, has worked with and taught students about social media for over a decade. Much of his own research also centers on how sports and social media have developed over time.

Because of the rapidly evolving nature of social media, Clavio created the book with longevity in mind.

The physical textbook focuses on the underlying concepts associated with social media strategies, such as audience and network analysis, messaging and different types of content. The book also has a web-based counterpart, though, which will be consistently updated with new guidance and examples from platforms such as Facebook, Twitter, Instagram and podcasts.

Clavio said the book can be useful for people hoping to work in any aspect of sports media, because the same key concepts apply for journalists and for people creating content internally in the sports industry.

“What I was trying to get across in the book was the idea that if you’re going down that path, you’re probably going to work for both sides at some point, but the core concepts of creating media, understanding how social media works when you’re trying to get messages out to people, all those things are essentially very similar if not the same,” he said.

While this textbook provides guidance and explains key social media concepts, Clavio said the best way to become proficient in social media is simply to use it.

Most students have only used social media in a personal way before coming to IU, Clavio said, but many of those skills are useful professionally as well. Since most students he’s teaching now have grown up with technology, he said they inherently understand some of the skills necessary to cultivate a professional social media presence.

“A lot of it is taking what they have and applying it to the reality of the professional environment,” he said. “It’s all about trying to figure out what works best to get the audience’s attention, and so much of that just comes down to following professional accounts and looking at developments that are going on in terms of how video is used or how writing is used and incorporating that into your own day-to-day activities.”

One key takeaway from the book is a guide to developing creativity on social media. To do this, Clavio suggests gaining an understanding of the industry, increasing industry-related vocabulary knowledge and practicing over and over.

“Once you get over that initial hump of saying ‘Hey, I want to do this, and it’s not as complicated as I thought,’ then it’s a matter of just doing it over and over until it becomes second nature and you don’t have to think about the creative process as much,” he said.