A man plays a piano in Dunn Meadow. The piano is set on fire, and there is a crowd around watching and taking pictures.

An upright piano was set on fire in Dunn Meadow on Wednesday night as part of the Wounded Galaxies 1968 festival commemorating the cultural and political aspects of that year.

The event featured a performance by an Anne Lockwood of her piece called “Piano Burning,” and members of the Writers’ Guild of Bloomington read poems as the piano burned.

A woman reads a poem into a microphone.

Talking love, talking revolution, which is love spelled backwards. How you would love us all. With thunder your anarchist wisdom at us with thunder Dante.

A man reads a poem at a microphone.

What if we wake one shimmering morning to hear the fierce hammering of his sperm knuckles hard on the door.

This event was part of a whole festival and symposium called “Beneath the Paving Stones the Beach.” Scholars, writers, artists, archivists, filmmakers and performers celebrated the 50th anniversary of 1968 by exploring its legacy. The festival will continue through February 11.

The piano, still burning, falls over, and the crowd watches.

Composer Annea Lockwood set fire to a defunct upright piano in Dunn Meadow on Wednesday as an avant-garde musical performance, part of this week’s Wounded Galaxies: 1968 — Beneath the Paving Stones, the Beach festival and symposium.

The Media School is one of the event’s sponsors. Wounded Galaxies continues today and through the weekend, featuring panel discussions, film screenings, keynote speeches, musical performances and more. 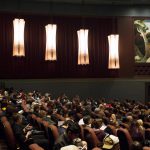 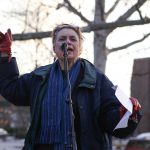 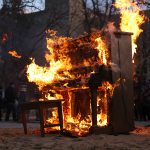 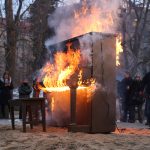 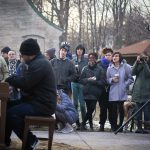 A crowd watches as a musician plays the piano as it begins to burn. (Emma Knutson | The Media School)