Raymer’s visual memoir, Somewhere West of Lonely: My Life in Pictures, was screened Sept. 8 before an international audience of about 500 photographers, editors and media executives at Campo Santo, the largest medieval cemetery in France. The 12-projector multimedia show of Raymer’s pictures was accompanied by his voiceover in English and French, explaining many of the pictures from the book by Indiana University Press.

“Raymer covered himself in glory with the presentation,” said Kent Kobersteen, former National Geographic director of photography. “Steve’s National Geographic colleagues were all talking about his show at La Poste, the local media gathering spot, and all agreed it was superb.”

Sharing the screen with Raymer were the French photojournalist Véronique de Viguerie and her show, “Yemen: The War We Are Hiding,” and Palestinian photographer Khalil Hamra of the Associated Press with a presentation called “Why Gaza?”

This was the 30th anniversary of Visa Pour l’Image, which is often compared to the Cannes Film Festival for still pictures.

In addition to the evening wide-screen presentations, the work of 21 international photojournalists was exhibited in various 14th-century buildings around Perpignan. A number of the print exhibitions dealt with upheavals in Africa, Syria and Yemen. Two of the most powerful shows — by Canadian freelance photographer Kevin Frayer and American Paula Bornstein of Getty Images  — documented the plight of Rohingya Muslims exiled from Myanmar to neighboring Bangladesh.

“Here, we show you the world as it is. With its dramas, its joys, its problems,” said Jean-François Leroy, the exhibition’s co-founder and director. Leroy said the mission of the exhibition is “to rediscover certain photographers sometimes overlooked, to endorse new talented photographers and to give an opportunity for young photographers to be seen and make a name.” 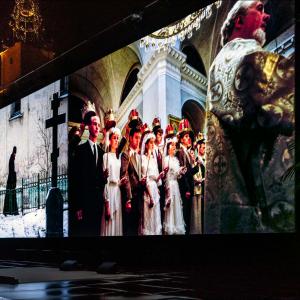 Images from Raymer’s new book are projected onto a giant screen at Visa Pour l’Image in Perpignan, France. (Steve Raymer | The Media School) 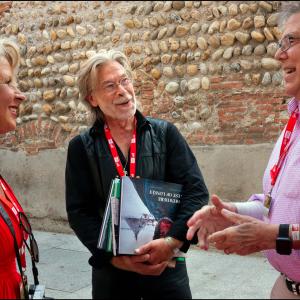 Emeritus professor Steve Raymer (right), talks with Emmanuel Sautai of Beaune, France, and his wife at the Visa Pour l’Image international photojournalism festival. Sautai edited the multimedia show of Raymer’s pictures from his new book, Somewhere West of Lonely: My Life in Pictures. 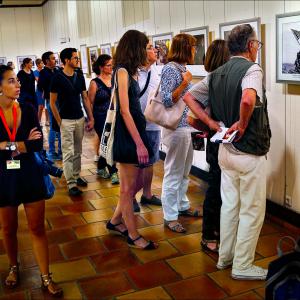 Gallery-goers at Visa Pour l’Image, the international photojournalism festival, look at 39 images, including Joe Rosenthal’s “Raising of the Flag at Iwo Jima,” that represent the best of 20th-century photojournalism. (Steve Raymer | The Media School) 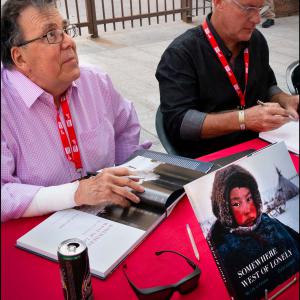 Raymer (left) signs copies of his new book, Somewhere West of Lonely: My Life in Pictures, outside Couvent des Minimes at the Visa Pour l’Image international photojournalism festival in Perpignan, France. Seated next to him is Pulitzer Prize winner John Moore of Getty Images with his new book, Undocumented: Immigration and the Militarization of the United States-Mexico Border. (Kent Kobersteen) 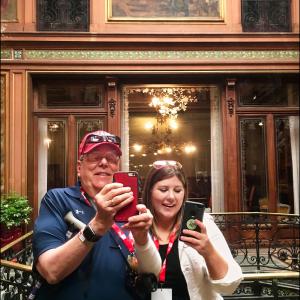 Raymer spends time with his daughter Katelynn Metz at Hotel Pams, one of the exhibition sites for Visa Pour l’Image in Perpignan, France. Metz is a Peabody Award-winning former producer for ABC’s World News TonightM. (Steve Raymer | The Media School)