While working on his film studies master’s thesis, then-graduate-student, now-assistant professor Ryan Powell found an old videotape at a used bookstore that inspired both his doctorate and his new book, “Coming Together: The Cinematic Elaboration of Gay Male Life, 1945-1979.”

What Powell expected to be scant on exposition and predominantly for arousal was actually rich with narrative content of a non-sexual nature. In one scene, a gay man called his mom and came out over the phone.

Powell started to think more deeply about that question. He went to film festivals and archives trying to track down more films from the same period.

In other films he found clever incorporations of camp, camp humor and even camp references. One film featured drag performance. One series, the “Working Man” trilogy, explored the lives of gay truckers and satirized masculinity. 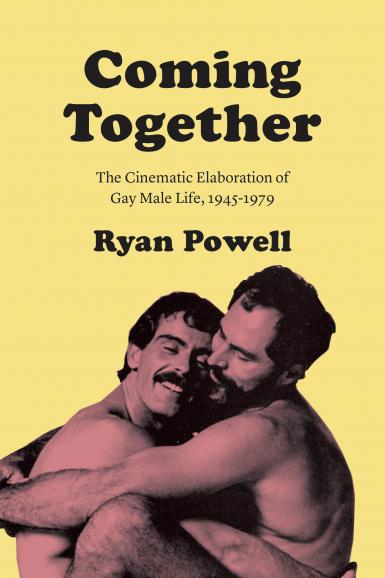 What started as research focused on the 1970s eventually expanded to the mid-1940s to accommodate all of the material Powell found.

“There was no material on a lot of what I was seeing,” he said.

One of his primary interests was how cinemas, both the physical spaces where films were shown and the actual films that inhabited them, contributed to the social and political coming together of gay men. And within that, he was especially fascinated by the relationship between the emergence of gay liberation politics and cinema — the way narrative content in homemade films and pornography could foster a sense of community among queer men and encourage them to be openly gay in the world.

In the absence of mainstream gay cinema, and in the presence of underground cinemas, lots of queer film found a place for exhibition in homes, community centers and other non-theatrical venues.

Powell also studied how queer filmmaking explored and represented spaces. He found a number of films set in Fire Island, New York. Others filmed sequences in gay bars. Powell wanted to explore the way films and their representation of spaces made certain locales legible to their audiences as gay spaces.

“There’s kind of a rich area of queer studies scholarship that thinks about space and spatiality, so I was also interested in bringing cinema into that,” he said.

Because of the underground nature of some of the films and cinemas Powell was dealing with, his research required lots of digging. He read old issues of The Advocate, a gay newspaper, in search of advertisements or reviews of films. He went to film festivals and searched archives: The British Film Institute, the ONE National Gay and Lesbian Archives held by the University of Southern California and the UCLA Film & Television Archive.

Plenty of what he found came from tips from other film scholars. Some harder-to-find films came from chasing leads; Powell managed to track down several out-of-circulation Pat Rocco films by finding the filmmaker’s phone number online and convincing him to share copies of old works.

For his research on cinemas and other venues, Powell relied on materials such as fliers, advertisements and posters. A University of Connecticut archive proved to be a treasure trove of material from the ‘60s and ‘70s. He also interviewed filmmakers and patrons.

The research took a total of six nonconsecutive years, he estimates, between the time he spent researching the material for his dissertation and the work he did later in revisiting the same material for his book.

The finished book, a 264-page volume published by the University of Chicago Press, distills 34 years of queer cinema history into four chapters that trace the growth of the first films made by, for and about men who love men. Powell said he wanted to let the films and film history guide the structure of the book, and thus a neat four distinct periods emerged.

Now that he’s completed “Coming Together,” Powell’s next book will explore the impact of aversion therapy on gay and trans life. The book, “The Picturing of Aversion Therapy,” will offer the first in-depth historical investigation of aversion therapy between its commercial development in the 1950s and discontinuation in the 1970s.