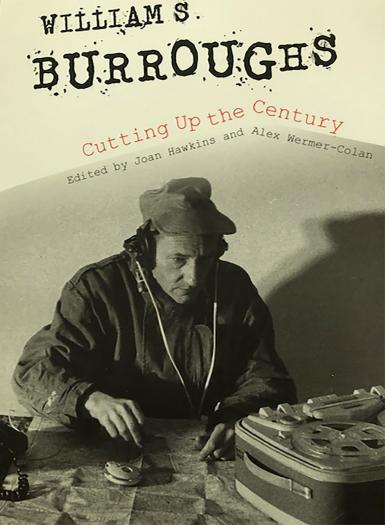 Media School associate professor Joan Hawkins, one of the organizers of the symposium — called The Burroughs Century — planned to publish the proceedings of the academic conference. The book would be a compilation of scholarly essays and research about Burroughs’ work.

But then Hawkins was offered a collection of unpublished Burroughs screenplays, scripts, dream texts, novels and “cut-ups” — a collage-like medium Burroughs was known for.

“William S. Burroughs: Cutting Up the Century,” published in May by IU Press, is a hybrid of scholarly work and never-before-published original pieces by Burroughs. It’s edited by Hawkins and Alex Wermer-Colan, the scholar who discovered the unpublished Burroughs work in New York Public Library.

“I work on avant garde cinema and experimental cultural groups in general,” Hawkins said. “So, I’ve had in interest in the experimental writers and filmmakers and performance people from the post-World War II period, and Burroughs is definitely one of those people.”

Hawkins hopes the book will be a resource to anyone interested in Burroughs, but also hopes it will help people reimagine the author in a new light.

As a prolific writer, Burroughs had many supporters, but not everyone approved of his lifestyle. He was a heroin addict, an occultist and a convicted murderer, having shot his wife during a drunken stunt in 1951. Burroughs was also one of the first openly gay writers, and certainly one of the first to talk about his sexuality in such a celebratory way, Hawkins said.

“We don’t know all there is to know,” she added. “Not everything is black and white. All of (the documents) sort of complicate this idea we have about Burroughs as a man and an author.”

The book was compiled by Hawkins, members of former Bloomington group the Burroughs Century and The City University of New York Graduate Center, where Wermer-Colan was working toward his doctorate when he discovered the unpublished archive in the Berg Special Collection at the NYPL.

The Burroughs collection was donated to the library in 2005, but was sealed to the public until 2009.

Hawkins, who refers to the project as a labor of love, said IU Press did a great job of preserving the appearance and integrity of the documents printed in the book.

“We wanted to preserve the documents sort of how they appeared in the archive, which meant that the Press had a lot of work to do,” she said.

The result is a book containing essays interspersed with archived documents – some typed and some handwritten – with Burroughs’ comments, notes and cut-ups throughout.

“It’s been amazing,” Hawkins said. “The stuff that’s in that collection of papers has caused people to reorder some of Burroughs’ novels. There’s some speculation that some of the novels were actually mispublished – within the text itself, they were published in the wrong order.”

Readers will have the opportunity to see examples of this in the book, which will include excerpts of rewritten material.

“William S. Burroughs: Cutting Up the Century” is available from IU Press and Amazon.