The word was “nautical,” and seventh grader Tara Ganguly sighed with relief. She spelled the word correctly and, after 21 rounds, took the title of the 2016 Scripps Regional Spelling Bee winner.

“I was relieved that it was something I knew,” said Ganguly, last year’s second runner up.

Ganguly was one of 27 students from Brown, Greene, Monroe, Morgan and Owen counties who participated in the 2016 IU Bee Feb. 13 at the Monroe County Public Library. The Media School and the School of Education co-sponsor the event each year.

The competition was stiff, with words like “tatami,” “vorlage” and “scherzo” unable to stump the participants. Several times, judges moved ahead in the official list to more difficult words as, round after round, participants spelled correctly.

The video starts with the library set up for the spelling bee, with a sign and a microphone. There is a Media School sign and numbered seats for the spellers.

Music plays. Spellers introduce themselves at the microphone.

The last five spellers come up to the microphone and spell several words.

“I’m sorry, you spelled the homonym. We now proceed to a one-word championship round. This is speller number 21. Should she spell correctly, she is our champion.”

Ganguly said she is looking forward to the trip to the national bee May 22-27 in National Harbor, Maryland. As the winner, Ganguly will receive round trip fares and lodging for her and a parent or guardian to the national competition. She also received the Samuel Louis Sugarman Award, which is a 2016 U.S. Mint Proof Set; a Merriam Webster’s Third New International Dictionary; and a one-year subscription to Britannica online.

Ganguly also tied for first place with Gabrielle Cooper of Bloomington Area Christian Homeschoolers in the vocabulary test, administered before the bee and optional for participants.

“At the national bee, spellers do take a vocabulary test, so we give one at the regional level a practice experience,” said bee organizer Teresa White, lecturer at The Media School and director of the High School Journalism Institute.

Judges were Media School professor of practice Tom French, Media School digital content manager Gena Asher and Media School director of communications of the Media School Anne Kibbler. Allan Murphy was the bee’s pronouncer for the 13th year, having started in this position during the years The Herald-Times sponsored the bee.

See a slideshow of the day. All photos by Media School senior Jill Moore. 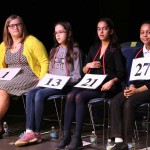 From left, Chloee Robison, Katrina Brown, Tara Ganguly and Lily Henning waited while judges conferred to select a more difficult wordlist for the spellers before the 12th round. Four rounds earlier, the four became the last remaining spellers in the bee. 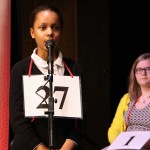 Fifth grader Lily Henning spelled the word “apostrophe” correctly and progressed to the 11th round of the IU Bee. Ten rounds later, at the conclusion of the bee, Henning was a runner up after misspelling “allegation.” 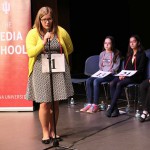 Eighth grader Chloee Robison spelled the word “renaissance” correctly after the judges moved to on to a more difficult word list for the spellers. Robison goes to Brown County Junior High. 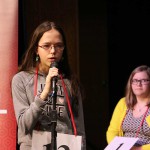 Seventh grader Katrina Brown spelled the word “edelweiss” correctly during the 14th round of the IU Bee. She tied for second place during the 20th round with fifth grader Lilly Henning. 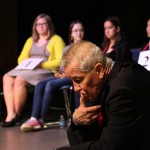 Thirteen-year pronouncer for the spelling bee Allan Murphy conferred with judges about changing the difficulty of the word list a second time. “These spellers are too good to spell out at this level,” said Murphy before continuing with the bee. 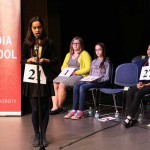 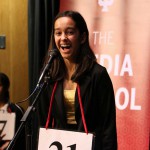 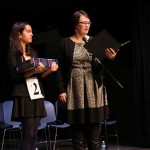 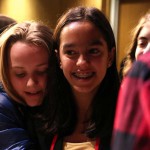 Ganguly’s four friends sat in the front row to cheer her on, then surrounded her onstage after her win. 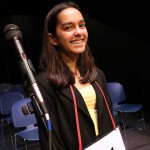