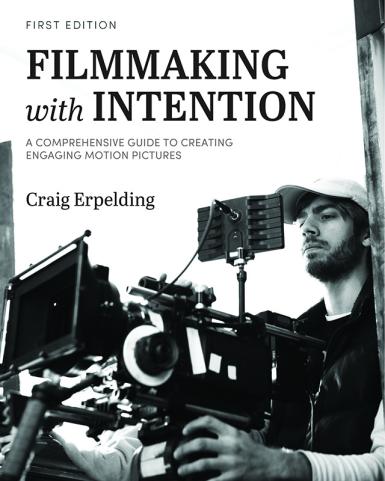 When Craig Erpelding was in college, some of his mentors told him directing wasn’t something everyone could be taught.

“Sometimes the directing teachers would say, ‘Well, you either are a director or you’re not. I can’t teach you to be one,’” he said. “I always challenged that and thought there’s got to be a systematic approach to that.”

With his new textbook, “Filmmaking with Intention: A Comprehensive Guide to Creating Engaging Motion Pictures,” Erpelding — a senior lecturer and director of The Media School’s B.F.A. program in cinematic arts — seeks to show students everything they need to know to become a filmmaker. The text from Cognella Publishing, which starts at an introductory level leading into advanced technique, has already been adopted into The Media School’s introductory production classes.

Erpelding, who has been working on the book since 2020, said he’s excited to finally see it in students’ hands.

“To have one textbook that just kind of says, ‘Hey, here’s me in 360 pages,’ is kind of a neat thing to have,” Erpelding said.

In addition to classes at IU, the book is expected to be taught in Chapman University directing courses. The university has been ranked as the fourth-best film school in the country.

Erpelding didn’t want to limit the text to just one of his classes or experiences, he said. He pulled its contents from different areas of his life: his work in the field, lectures in class and what previous professors have shown him.

The book is centered on the intention of filmmaking. Erpelding says each film seeks a certain reaction from the audience, and the choices a producer makes should all lead up to that response — whether it be tears, laughter or heartbreak.

“So if we understand why we intend to make a movie: ‘What is the visceral response we hope to elicit from the audience?’ Then when we go through the production process, we can say whether or not we’ve succeeded in making that happen,” Erpelding said.

Erpelding is creating supplementary resources for textbook users that would allow them to practice the skills taught in the book. This includes quizzes and other hands-on activities.

Erpelding hopes this is a book students can use long after they’ve stepped out of their first production classes.

“This would hopefully be a resource that students, when they leave after they graduate, would hold onto as they go out and work in the industry,” he said. “The idea is that it’s not just a textbook that they buy for a class and then sell back at the end of the term to the bookstore.”