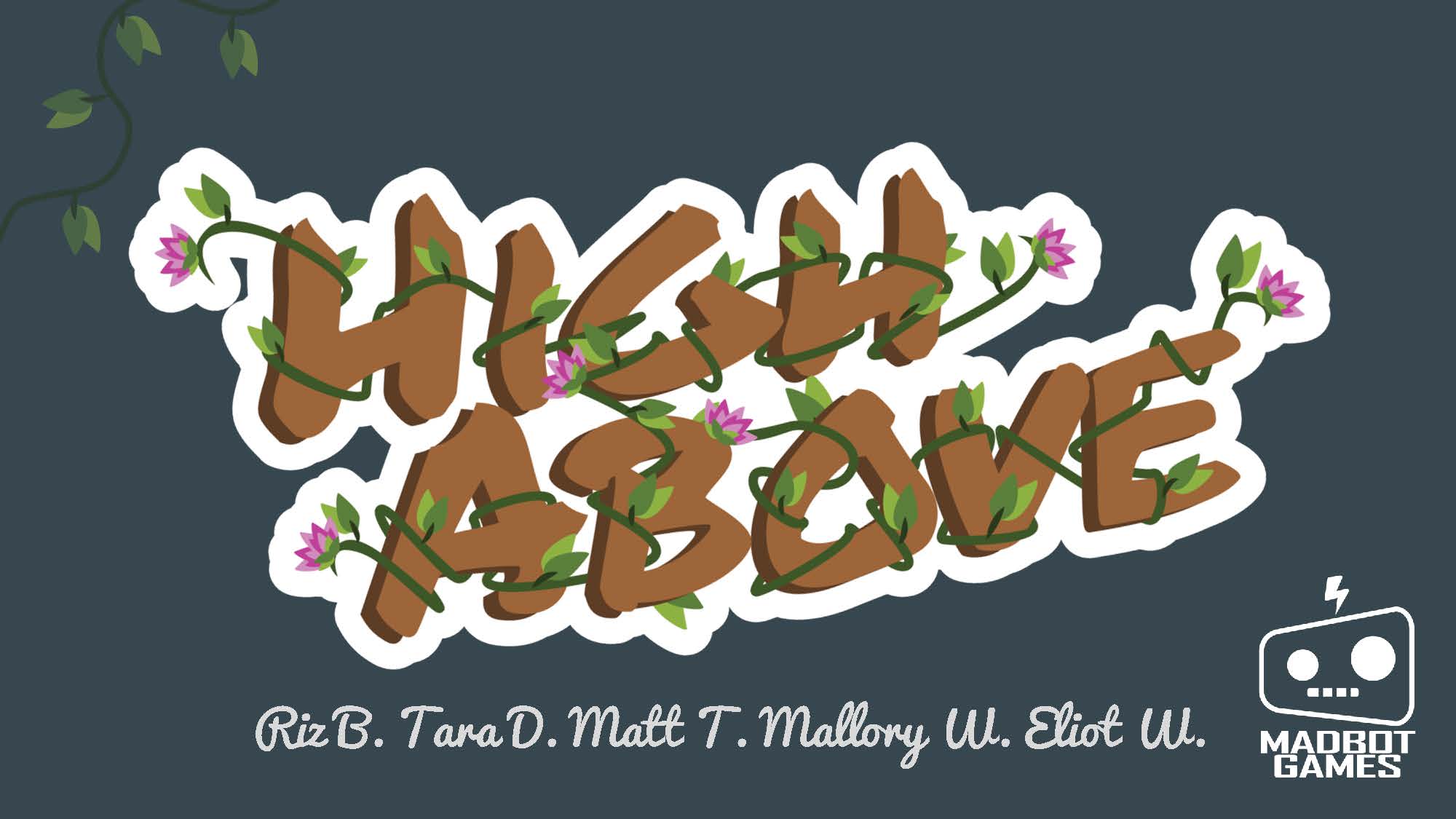 Discover bugs, mushrooms and other wildlife as a vine growing up a tree.

The game is based on a core loop: the vine grows up the tree, interacts with the environment and recharges its stamina so it can continue to grow up the tree.

“High Above” features a calming environment, 3D design, a stylized realism theme and forest-like sounds. Players discover interactions between bugs and mushrooms, and save the moments in a memory album.

The game is designed for a mobile platform, and its target audience is casual gamers.

“High Above” will be developed and published during spring semester.

Students stand around a podium in the Franklin Hall Commons in The Media School.

Hello, I’m Eliot, I’m Matt, I’m Riz, I’m Mallory, and we are Mad About Games, and the game we’re presenting today is “High Above.”

Our concept statement: “High Above” is a 3D exploration game, where you can climb trees and create your own relaxed experience as a vine trying to reach the top and beyond.

A picture of the team’s concept statement is shown on the big screen. The slide has pictures of vines, flowers and cartoon bugs as well.

Furthermore, our design principles are discovery, adventure and serenity.

A slide with the team’s design principles is shown on the big screen.

These are what wait for you in “High Above.” Strive toward these feelings as you take on the role of a vine growing up a tree. The way you make it to the top is up to you. Interact with different aspects of the tree, and explore with mushrooms, bugs and other life to learn what the forests have in store.

Our unique selling points are our tree trunk exploration, the 3D space that the player finds themselves in — they can move 360 degrees around this trunk — and this creates interesting interactions to where they don’t know what’s on the other side, and this leads to exploration. Our organic vine movement — the player is the vine, so we want them to feel very natural and a part of this tree. We’re also looking for a relaxed immersion where they can take this mobile game and play it, take all the stresses of their everyday life and everything. This game is on your side. You’re trying to have a relaxed, calming environment that you can play through, and then one of our main mechanics is vine blooming. Periodically as they are growing up the tree, the player can sprout blossoms, and this will not only affect the environment, but they can then come back to these blossoms and explore the tree more in-depth.

A slide with the game’s core loop appears.

Our game’s core loop is quite simple. You start with growing up the tree. This then leads into the interactions with the environment. Both of these are using energy that then are recharged as you recharge your stamina by sitting in patches of sunlight to then continue growing up the tree and follow this loop through.

OK so as mentioned beforehand, we want the player experience to be peaceful and relaxing as they go through and how we want to do that is through our key moments, such as discovering different types of synergies between bugs and mushrooms and saving those said moments in a memory album.

Students switch speakers at the podium, and other group members start to speak.

So for player goals, we have a system of optimizing interactions, which means we want to reward the player based on their degree of play. So for example, if the player brings one bug to a mushroom, it might eat the mushroom, but if they bring multiple bugs to that mushroom, they might dance underneath it instead. Also, back to what Riz was saying, whenever the player discovers one of these new interactions, a snapshot at that memory of that gameplay will be saved in a memory album that they can access and look through later.

Our main player motivations revolve around the discovery of these new types of bugs and plants that will be specific to and dependent upon the player’s progression, as well as the theme of the level they’re in. We want to gradually introduce the player to these new interactionables, so their curiosity is piqued but they also have time to think about how they synergize with things they’ve already discovered.

A slide with attribute-based interactions appears.

A slide explaining game play appears. There are gifs showing how stamina and interaction work in the game.

Our big game design goal regarding gameplay was finding the right balance between challenging and tranquil. So to do this, we tested a couple of binaries of prototypes. The first one on the left is our stamina prototype, where we implemented our short-term cognitive loop of a stamina system, where the player’s trying to get to the top of the tree by regenerating stamina by using these patches of sunlight that you can reach along the way. And on the second prototype, on the right, is our interaction prototype which includes a rough implementation of what the vine might look like as the player and how the bug will follow the player and can be led to certain basic interactions.

Some games that inspired us were the games such as “Hohokum,” the game “Everything,” “Eidolon,” “Prune” and “Viridi.”

There were many different variables to these, such as how the interactions were made interesting, the immersion that they had, the sense of adventure, as well as their art style. And for our art direction, we are going for a simplistic 3D design that kind of helps create a more cozy feel, as well as interesting and bright colors, but not so bright that they detract from the calming atmosphere.

So we’re really going for that simple 3D design and like a stylized realism theme to help create like that coziness, but like you’re not on an alien planet.

For sound design, we wanted to focus on ambient soundtracks that derive from nature-like sounds such as rustling leaves, wind, bugs, running water, things like that in order to perpetuate that theme of relaxed immersion and not distract the player from the gameplay.

In our long-term goals, we plan on implementing a thematic environments based on the four seasons and different types of weather that also include theme-specific bugs, trees and plants. And we also want to implement a vine attribute system for more of the long-term to keep the player interested in between levels and forests, where the player can to find hidden pickups either through discovering certain interactions or exploring certain areas of the tree, that can, when picked up, can change how the vine moves, how it looks, how it uses stamina or even the nature of the vines interactions themselves. And lastly, we want to implement a secondary game mode that allows the player to grow and explore in an endless environment with no limitations or boundaries.

OK so we plan on releasing our game on the mobile platform and aim our target audience toward casual gamers or anyone really looking to pass time in a more relaxed manner.

We do plan to make this game premium price, as we don’t want advertisements to take away from the immersion that we’re aiming for, and we are considering having four trees available for free for the player to play on and then leading them to buying the game itself.

Are there any questions?