When Charles Teeple, BA’50, worked for the Indiana Daily Student, the paper was housed in a Quonset hut, a semi-circular structure with a wooden floor and steel roof. Leftover from World War II, the IDS and its printing press were kept in this structure until eventually moving into Ernie Pyle Hall.

Teeple was the oldest alumnus to attend the IDS anniversary celebration this weekend. About 300 alumni joined him in Franklin Hall on Saturday to celebrate the 150th anniversary of the Indiana Daily Student’s first edition.

Alumni from all different eras shared their favorite memories working for the newspaper, took tours of the new building, sat in on panels discussing the future of the IDS and raised a glass to the past and future of the paper.

On most students’ and alumni’s minds: the future of journalism, business models and the student-run newspaper.

Teeple was the editor-in-chief of the IDS during his final semester at IU. He said it’s amazing that the IDS has lasted so many years and has evolved so well.

“I hope it continues to meet the needs of the student population in whatever form is appropriate at the time,” Teeple said.

Eleanor Chute, BA’75, said journalism and how to sell the news has always been a challenge. However, she is optimistic about the future of the IDS.

She said the IDS is so much more than a newspaper. With its online presence, it has created a strong brand. She added she was optimistic about the future of the news, saying it will probably include a lot of aspects no one even knows about yet.

“Every university needs an IDS, in whatever form that takes,” Chute said.

No one knows the answers right now, she said, but someone will think of it one day.

“People want the news,” Waclawek said. “Accuracy and getting to the truth is always valued.”

With IDS archives to look through, a slideshow highlighting previous IDS coverage and staffs and old IDS memorabilia, alumni also got a chance to think back on their time at the newspaper.

Jake New, ’13, said the celebration gave him the opportunity to see everyone he used to work with and learn where everyone ended up.

“I owe everything to the IDS,” New said. “I learned way more at the IDS than in any other classroom.”

James Brosher, BAJ’10, said he practically lived at the IDS for three and a half years. He now works for IU Communications as a multimedia producer, a job he said he wouldn’t have had if it weren’t for his work at the IDS.

“You can learn the framework for journalism in class, but the work at the IDS is invaluable,” Brosher said.

At the end of the day, hundreds of alumni gathered in Presidents Hall for a reception and a presentation by current and former IDS staffers.

Jamie Zega, current IDS editor-in-chief, started the program, saying she never wanted to come to IU. Now, however, she loves it, and part of that is because of the IDS. It helped make a big school feel small.

“Every great experience in my life I can credit to IU and the Indiana Daily Student,” she said.

Amy Wimmer Schwarb, BAJ’98, president of the IU Student Publications Alumni Association, gave the toast at the end of the day.

She raised her glass with the rest of the room.

“To the staff of the Indiana Daily Student, past, present and future. Cheers.” 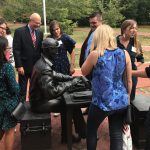 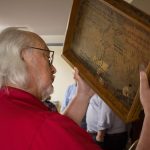 Merv Hendricks, BA’73, finds his signature on “Ernie Pyle’s Desk” in the IDS newsroom. It is an IDS tradition for editors-in-chief to sign their name on the antique desk after they’ve completed their term. (Terry Wicks | The Media School) 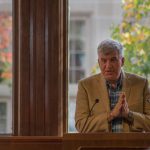 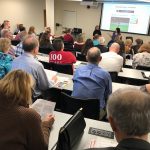 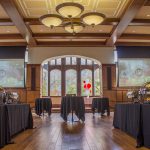 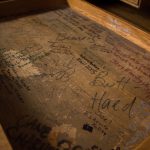 Signatures from previous decades of editors-in-chief of the Indiana Daily Student cover a drawer in a desk in the IDS newsroom. Many alumni sought out the drawer to find their signatures from college. (Terry Wicks | The Media School) 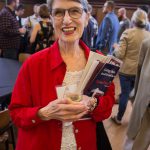 Myrna Oliver, BA’64, attends the formal reception in Presidents Hall. Oliver participated in a panel discussing current media topics and the development of the media industry as a part of the festivities celebrating the Indiana Daily Student. (Terry Wicks | The Media School) 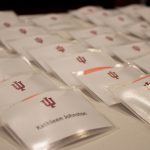 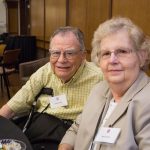 Charles Teeple, BA’50, and his wife Nancy Teeple celebrate the 150th anniversary of the Indiana Daily Student with friends and classmates. (Terry Wicks | The Media School) 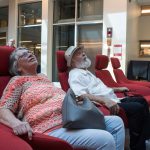 Bryan Moss, BA’66, and his spouse Mary Jo look up at the television screen in the Franklin Hall commons. The building that housed IU’s library when he was in college has changed significantly since Moss graduated. (Terry Wicks | The Media School) 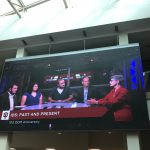 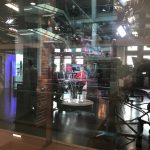 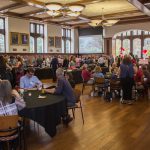 Alumni from across the country traveled home to celebrate 150 years of independent journalism. (Terry Wicks | The Media School) 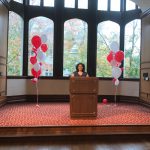 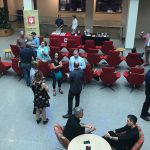 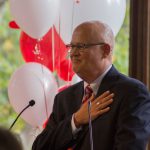 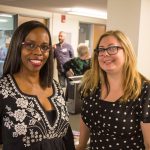